Usually, there’s only one generic design for a massage gun. But somehow, the Theragun Pro proves that there is a more ergonomic design that will make massage easier to do on your own.

Here’s my review of the Theragun Pro. I’ll also share my thoughts if this massage gun is more about design than quality. The Theragun Pro is just like its other Theragun models – its design is unlike any other brand’s massage gun. If you’ve ever held a Theragun massage gun before, you know that its designers definitely prioritised ergonomics as one of its main selling points.

Even when I used it for the first time, I didn’t think that it would give my hands such a relief with its angles.

What does the Theragun Pro look like anyway? Well, it’s shaped like a triangle. It’s a thick triangle with a hole in the middle and on one side there’s a lever that extends from the corner. That’s where you put the attachment heads.

Don’t worry, that lever is adjustable to make it even more comfortable to reach other parts of your body like your lower and upper back.

Other than its design, the Theragun Pro is controlled through an app. This means that you won’t be seeing any buttons on the device itself. At most, you’ll see a small rectangular screen at the tip of the lever that indicates the current speed of the massage gun.

To change the speed settings, you have to go to Therabody’s app. This, I’ll describe in more detail later.

The Theragun Pro is a heavy-duty gun, or so it claims. However, if you only look at its maximum RPMs, it only reaches 2400 compared to other massage guns (they reach 3200 RPMs).

Nonetheless, when I tried the Theragun Pro myself, I didn’t mind that it didn’t reach 3200 RPMs because the percussive technology of the Theragun Pro is able to give a deeper tissue massage.

On paper, it might look like you need a massage gun that provides the greatest number of percussions per minute, but it all comes down to the kind of percussion that is actually made. And for this one, the percussive therapy of the Theragun Pro is amazing.

Overall, I enjoy using Theragun Pro. Up to this day, it’s one of my favorite massage guns simply because it’s very easy to use. The app integration might be the new wave of features coming from massage guns. The first time you’ll notice with the Theragun Pro is that it’s triangular. Compared to your usual hammer-looking massage gun, this particular massage gun doesn’t have a handle like you would expect.

Honestly, I didn’t think that it would be different and I assumed that the design is just a fancy way to stand out from the sea of massage guns.

I was mistaken. The triangular shape does help in making my arms and hands feel relaxed even when I try to reach my back or the back of my legs. It greatly reduced the strain on my wrists and shoulders whenever I try to reach for my other body parts.

Another design innovation Theragun has is the adjustable angles for the arm. The arm is the longer lever where the attachment heads are placed. You can adjust it to four different angles from 90-180 degrees.

This is really a great help to me because there are other parts of my body that were massaged better with a different arm angle. 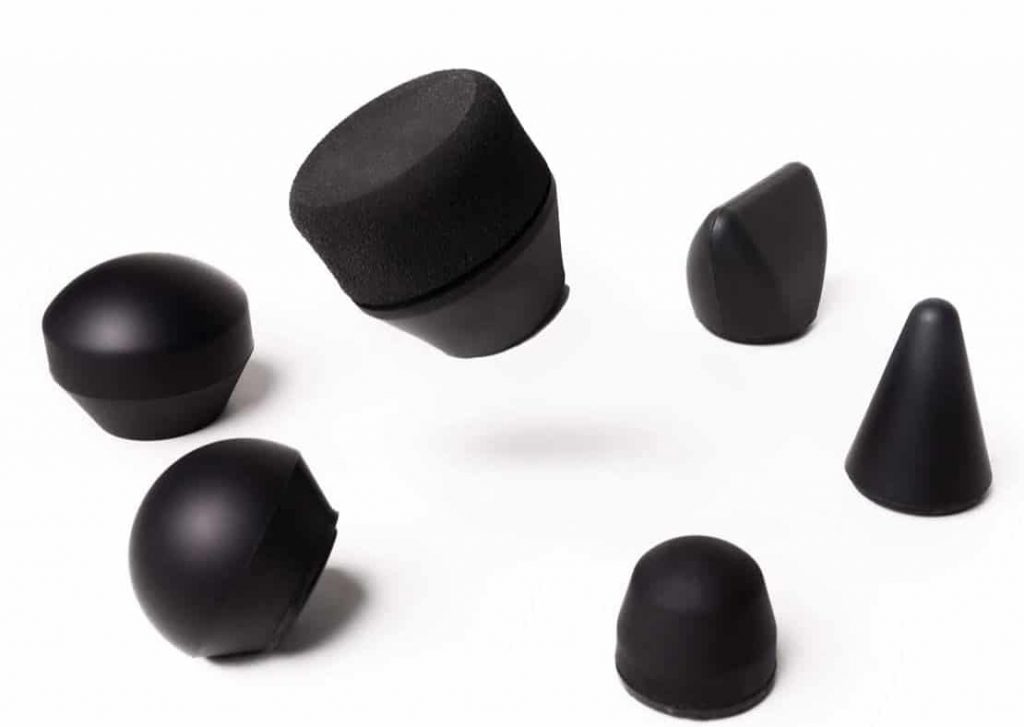 Just like the design, the attachment heads don’t look like your usual fork-like, ball-like attachment heads. At this point, you should expect the Theragun Pro not to have many similarities to other massage guns in terms of design.

This isn’t a bad thing, though, because all the design innovations they had, actually delivered on what it promised in the Theragun site.

Going back to the attachment heads, there are six of them that are included in the package. There’s a Supersoft™ dampener, dampener, standard ball, wedge, thumb, and cone.

All of these are designed slightly different than their counterparts from other brands.

Let’s start with the Supersoft™ dampener. Taken from its name, this is the attachment you need to use when you just want a very mild massage. It’s perfect for sensitive areas and bones.

I don’t really use this that much because I often just focus on my back but when I do, it gives a relaxing vibration to my bones. It is cylindrical with a flat tip, so you can also use this on your hip bones, elbows, knees, and other angular bones in the body.

The second head is the dampener. Its shape is like a very small cupcake with a broad round tip. The dampener attachment is made for overall use. You can use it on bones, muscles, and other tender parts of your body. Of course, you still can’t use this on your neck because you’re not supposed to use a massage gun on your neck anyway.

The standard ball is by far the only attachment head the Theragun Pro has that is similar to other massage guns. According to Theragun, this attachment head is best for overall use.

Personally, I only use it in medium to large-sized muscle groups because the tip is rounder compared to the dampener. Another weird-looking attachment head is the wedge. Wedges are great for the shoulder blades because the shape helps reduce the lactic acid that’s stuck in between the shoulders. Whenever I have an aching upper back, this is often my favorite to use.

The thumb, on the other hand, is best for trigger points. I should warn you, though, that this does not give you the same type of depth as acupuncture would because they are very different from each other.

What the thumb does is to just help you push a little deeper into those trigger points on your lower and upper back.

Lastly, there’s the cone. The cone looks a lot like a large ballpoint pen because of its pointed tip. This one may seem like it’s made for trigger points, but it’s too pointed to give you any relaxation.

Rather, I use it in the middle of my palms and my feet for a pinpointed muscle treatment. This is the attachment head that gives the most intensity.

All these attachment heads are not made of hard plastic because Theragun believes that it can eventually harm the body. Instead, the materials of all the five heads (dampener, standard ball, wedge, thumb, and cone) are made from non-porous closed-cell foam.

To clean them, you can just wipe them with soap and water and make sure to dry them after. The Supersoft™ attachment head is made of soft foam. The Theragun Pro boasts of a robust motor. It uses a professional-grade power unit that allows it to provide a deep muscle treatment. To give you a comparison, it has a 60% deeper muscle massage than other massage guns.

When you even compare the Theragun Pro to the 3rd Generation Theragun, the former still wins in terms of quality of massage.

Now you would expect a motor this good to be noisy, right? Great news, the Theragun Pro’s motor is very quiet.

This is thanks to the QuietForce Technology QX150 that Theragun itself developed. You don’t have to worry about waking anyone up even when you increase the intensity level.

In fact, I used it at work once and my seatmates didn’t get bothered with the sound of the motor. At most, it just creates a low humming sound similar to a phone’s vibration. If the speed level isn’t that fast, it’s even quieter than a phone’s vibration. This is another feature of the Theragun Pro that I haven’t seen elsewhere. This gave me such a “smart massage gun” vibe.

Remember when I said that you can barely control the speed settings on the device? That’s because Theragun Pro is promoting the use of its app that’s available on both iOS and Android.

The app can be connected to Apple Health and Google Fit so it can build recommendations based on your activity. There are also some guided routines that you can follow depending on what your focus is for the day.

If you’re wondering how it gets connected, the Theragun Pro has a Bluetooth connection which enables your phone to control the intensity settings and modes.

In all honesty, I’m not used to using the app to adjust the settings. Oftentimes, I already have an idea of what my muscles need, so I didn’t think that the app would help me in terms of guided routines.

However, when I got to use it, I realised that it was able to give my body a lot of muscle relaxation and more. The areas that I think didn’t need any massaging were recommended and after that, I kept going back to the app for more recommendations.

If you want a smarter way of using a massage gun, I suggest that you use the Theragun app. It integrates well with other health apps to provide more information about your muscles. And then we have the batteries. The Theragun Pro comes with two lithium-ion batteries that are both rechargeable. You only need one battery to operate the massage gun, but there are two compartments for the two batteries in one of the sides of the triangle.

The battery lasts up to 150 minutes per piece. Since you only need one battery, you can charge the other one while you use the other for days. My average daily use is just 15-30 minutes so one battery lasts me a little less than a week. For the charging time, it really depends, but it’s usually 3 hours average. Should You Buy It?

Even if the Theragun Pro looks a little different, it’s a great option for a massage gun if you’re in need of deep tissue massage. The deep massage is very relaxing and you can have that kind of massage all over your body thanks to the six attachment heads that go with it.

My recommendation is that you use it at home unless you’re willing to bring the whole thing with you to the gym. It’s a little heavy, but I think that’s because of the powerful yet silent motor. Overall, the massage gun is a great buy and I’ve been using this for a year now, so it’s also very durable!